A little ray of sunshine from Australia

A dark cloud is descending on Melbourne: Not in the bash 747man club

ON THIS DAY – 5th January

1827 – First boat regatta held on the River Derwent. On 30 April a regatta was held in Sydney.

1833 – The Perth Gazette and the West Australian Journal were first published by Charles Macfaull.

1891 – The 1891 Australian shearers' strike began, which led to the formation of the Australian Labor Party.

1974 – Four people, including three flood victims trying to get home to Darwin, died when the light plane they were in crashed near Barkly Down homestead, 60 miles north-west of Mount Isa, Queensland.

1974 – Prime Minister Mr Whitlam presented the inaugural E.G. Whitlam Shield to the Australian racing team for its victory over a visiting US team at Liverpool Speedway.

1975 – Tasman Bridge disaster: The Tasman Bridge in Hobart was struck by the ore carrier MV Lake Illawarra. The bridge partially collapsed onto the vessel, which sank. Seven crew and five motorists were killed.

1975 – The first One-day International cricket match was played at the MCG, between Australia and England.

1976 – Elizabeth Evatt was sworn in as first Chief Justice of the Family Court of Australia.

1977 – Australia's only aircraft suicide attack carried out by a disgruntled former employee of Connellan Airways took place. The Connellan air disaster claimed the lives of 6 people including the pilot.

1978 – Corrective Services Commissioner, W. McGeechan, talked 120 maximum security prisoners back into their cells after a 5-hour protest sit-in at Parramatta jail. The sit-in followed the riot by about 150 prisoners at Long Bay Jail on Christmas Day and an attack on a warder at Parramatta Jail on New Year's Day. The Parramatta protest centred on three complaints: the removal of TV leads in prison cells, lack of fresh fruit, and a demand for award wages.

1982 – A Cessna 411A aircraft crashed into a building at Archerfield Airport. The pilot and four people within the building were killed.

1986 – Actress Lauren Bacall arrived in Sydney to star in the play Sweet Bird of Youth. 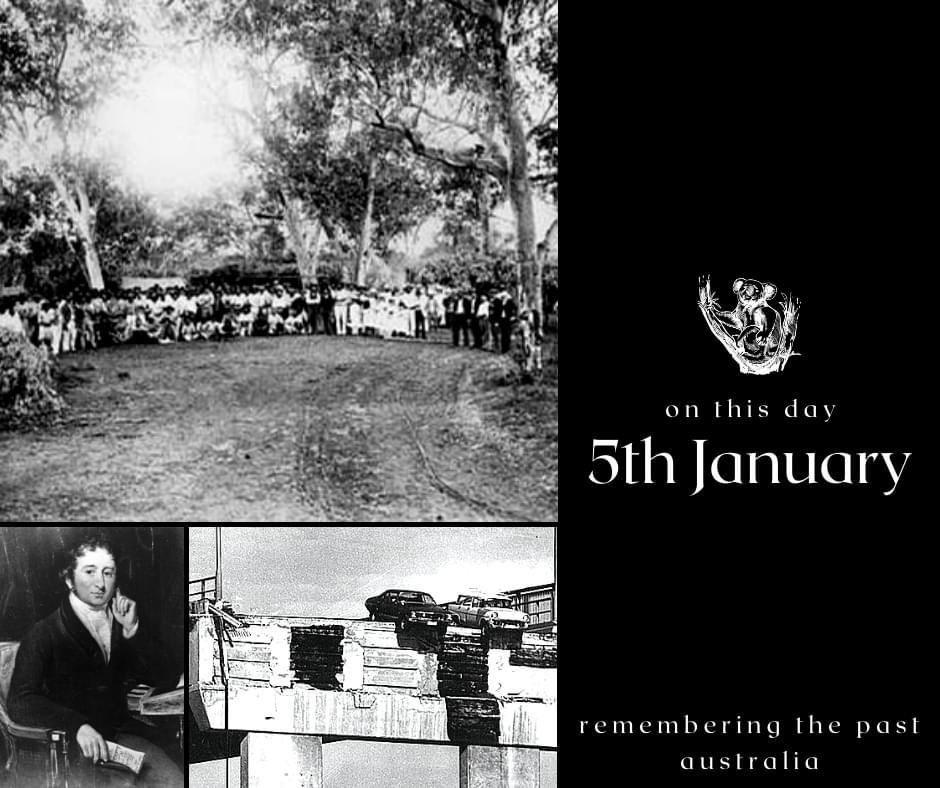 Thanks @Barney, I find these snippets quite interesting.
Did a bit of research:-
1971 - Was not an official cricket event rather than a quickly orchestrated fill in for a washed out test match.
1975 - Yes, that was the 1st scheduled ODI.
Sent from my 1977 Apple II using 2 Heinz bake bean cans and piano wire!
Top

Bandung_Dero wrote:Thanks @Barney, I find these snippets quite interesting.
Did a bit of research:-
1971 - Was not an official cricket event rather than a quickly orchestrated fill in for a washed out test match.
1975 - Yes, that was the 1st scheduled ODI.

Thanks mr dero
I noticed that as well and followed up your own research.
Absolutely correct.
I quite often myself check individual snippets to further my limited Aussie history. Helps keep the cogs inside my head lubricated.

ON THIS DAY – 6th January 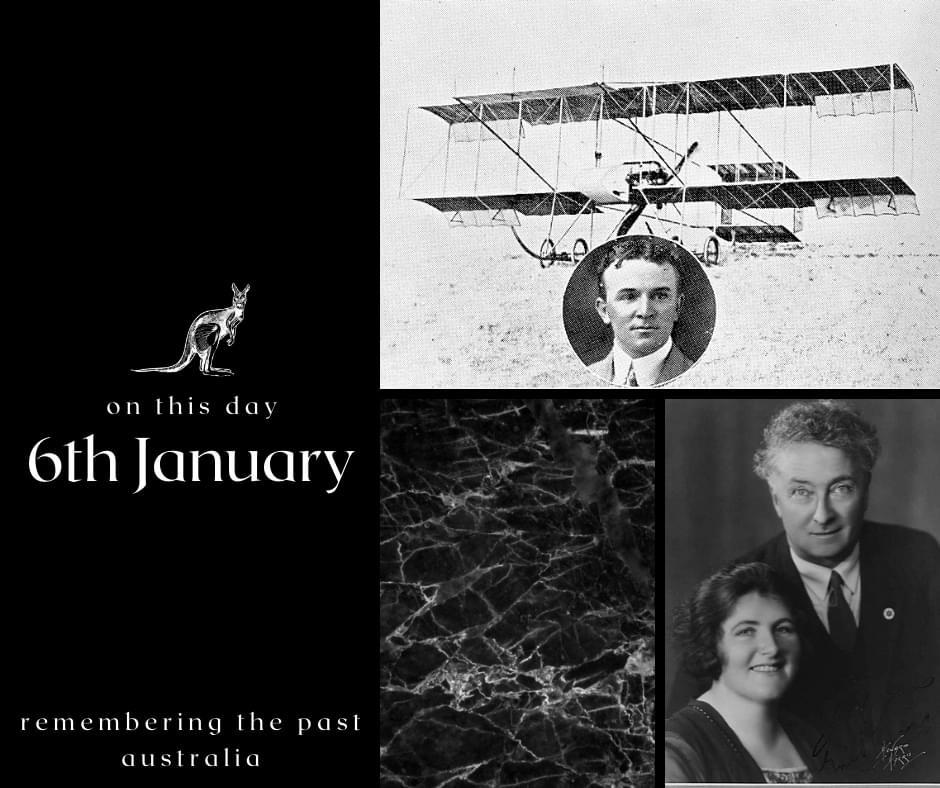 ON THIS DAY – 7th January

1799 – Bass and Flinders complete their first circumnavigation of Van Diemen's Land in the sloop Norfolk.

1867 – Riots at the Crocodile Creek goldfield destroyed the property of Chinese miners.

1897 – Darwin had its highest ever daily rainfall with 296.1 millimetres from its most severe cyclone until Tracy.

1991 – Australia sent troops to assist the United Nations with the Gulf War. 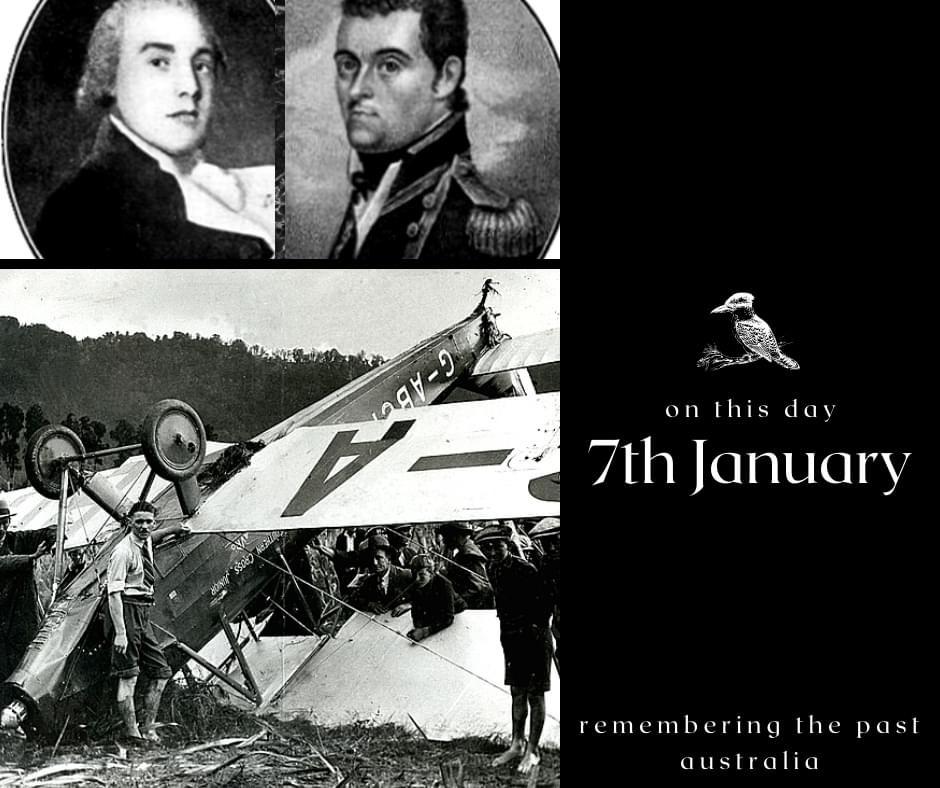 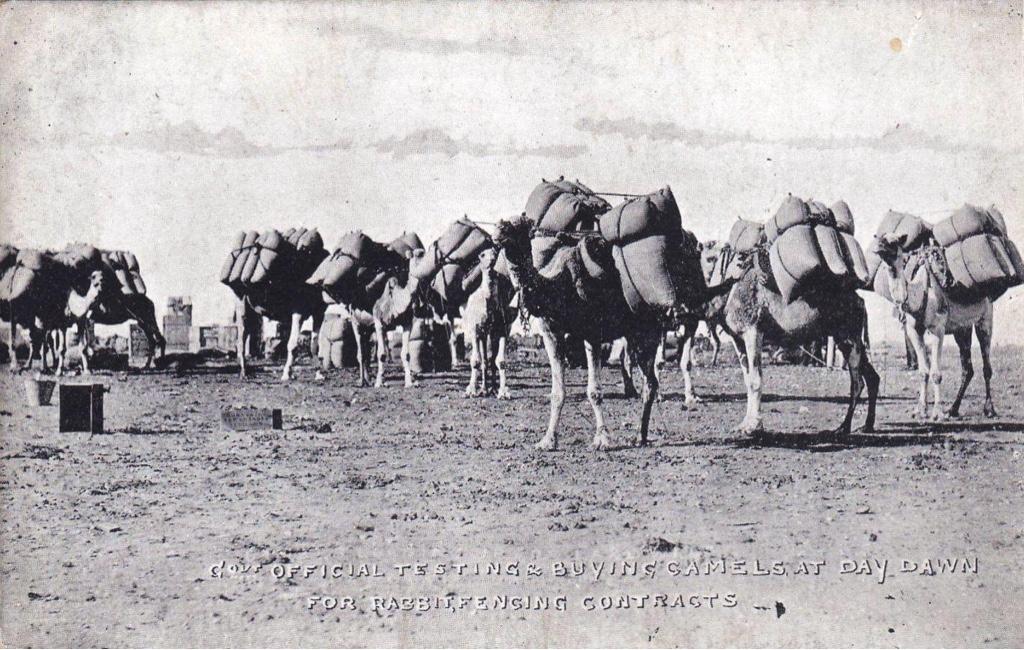 ON THIS DAY – 8th January

1818 – Governor Macquarie accused Samuel Marsden of conspiracy against him.

1869 – Bushfires across Victoria claim the lives of 23 people including 17 who died when a grass fire overran a group of cars on the Princes Highway at Lara, near Geelong in Victoria. About 280 fires in total burned 250,000 hectares, destroyed 230 homes and dozens of other buildings, killing 12,000 head of stock.

1878 – The telephone is used for the first time in Australia in Melbourne.

1878 – (8 & 9 January) "Black Wednesday", 300 senior public servants were sacked in Victoria by the government of Graham Berry as revenge against the Legislative Council, on the grounds that as the appropriation bill had not been passed in the council, they could not be paid.

1878 – Death of art collector and philanthropist Alfred Felton and the establishment of the Felton Bequest for the National Gallery of Victoria.

1918 – Billy Hughes resigned as Prime Minister of Australia as promised following the defeat of the 1917 plebiscite on conscription. He is immediately sworn in again by the Governor-General as there are no alternative candidates.

1931 – The largest Australian gold nugget of the twentieth century was found in Kalgoorlie.

1970 – The Army Minister Andrew Peacock denied the statement made the previous day by senior Labor figure Jim Cairns that Australian officers in Vietnam had suggested to troops that they would be home by June.

1998 – The VIII FINA World Championships were held in Perth. Ian Thorpe won his first gold medal at a major meet in the 400m freestyle. Human growth hormone were found in a Chinese swimmer's bag at Sydney Airport, resulting in her deportation.

Pictured:
Frontispiece of "Life and Work of Samuel Marsden" by John Buxton Marsden, ed. James Drummond 1913 – Top Left
Jim Larcombe and his father, Jim Larcombe snr. [Down to their last provisions, money and hope, unearthed a long flat nugget. Other prospectors working in the area heard their shouts and it is said they thought the Larcombes were carrying a dead eagle. Certainly, the resemblance is undeniable – hence the name, Golden Eagle.] (Perth Mint) – Bottom
Rewind: 1998 World Swimmers of the Year – Ian Thorpe (Swimming World Magazine) – Top Right 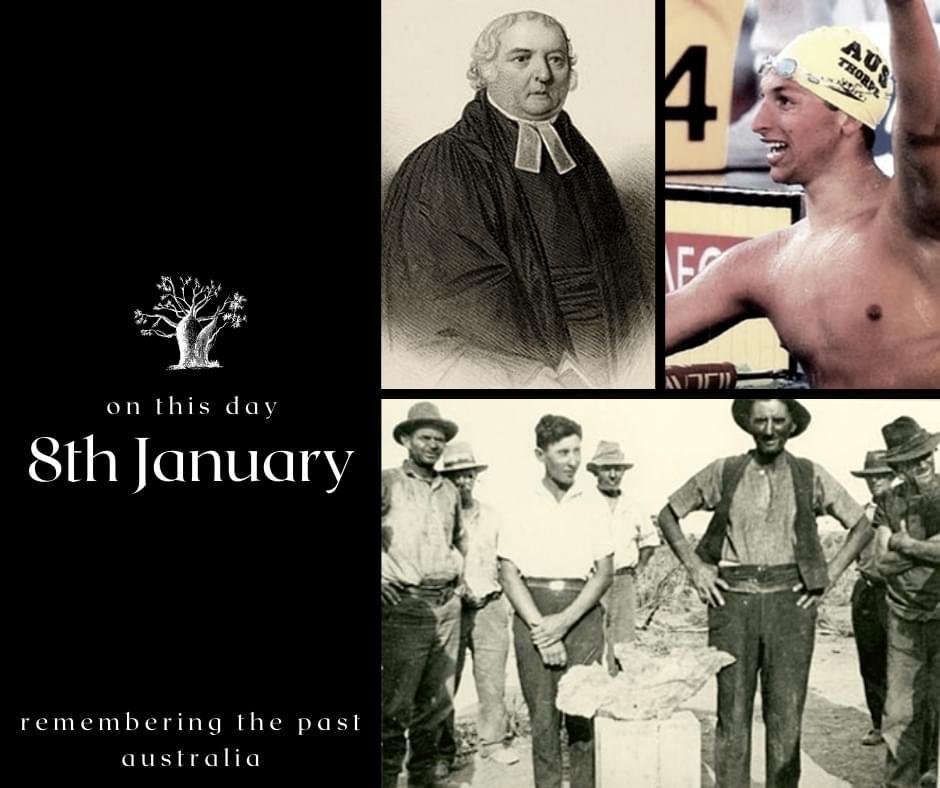 1869 – Bushfires across Victoria claim the lives of 23 people including 17 who died when a grass fire overran a group of cars on the Princes Highway at Lara, near Geelong in Victoria. About 280 fires in total burned 250,000 hectares, destroyed 230 homes and dozens of other buildings, killing 12,000 head of stock.

ON THIS DAY – 9th January

1816 – Explorer James Kelly landed at Port Dalrymple, Tasmania, where he was mistakenly arrested as a bushranger.

1869 – The British clipper ship Thermopylae arrived in Melbourne, having sailed from London in the record time of 64 days.

1940 – The Australian Comforts Fund was re-established.

Pictured:
'Thermopylae' was sold to Mr Redford of Mount Royal Milling & Manufacturing Co. of Victoria, British Columbia for the sum of £5,000 where after a refit and changes to her rigging (reduced to barque rig) she traded the northern Pacific. 1890 (The Doric Files) – Top
The Australian Comforts Fund (ACF), based on its First World War predecessor, raised money for comforts parcels for Australian service personnel in the field, clothing and the provision of meals and accommodation for men on leave. (Australian War Memorial) – Bottom 1697 – Willem de Vlamingh made the first documented European sighting of the land region which became the city of Perth.

1853 – The Adelaide Philosophical Society was founded, predecessor of the Royal Society of South Australia.

1928 – Lieutenant John Moncrieff and Captain George Hood took off on their disastrous flight across the Tasman to Wellington. Eyewitness reports suggested the plane made it on land but crashed shortly before reaching the destination. Others said they saw the plane crash in the Marlborough Sounds area. Wreckage from the crash had never been found.

1931 – The Beef Riot took place in Adelaide. Seventeen people were injured when unemployed men clash with police while protesting the decision to remove beef from the dole ration.

1968 – John Gorton was sworn in as Prime Minister of Australia after the disappearance of Harold Holt.

1977 – The Easey Street murders take place, an unsolved crime in which two women were brutally stabbed to death in their home in the inner-Melbourne suburb of Collingwood.

1989 – Assistant Australian Federal Police commissioner Colin Winchester was shot dead in the driveway of his Canberra home by a sniper, later identified as David Harold Eastman.

2000 – CASA issued an Airworthiness Directive which grounded all aircraft after being advised the day before that more contaminants had been found in fuel produced at Mobil's Altona refinery in Melbourne. 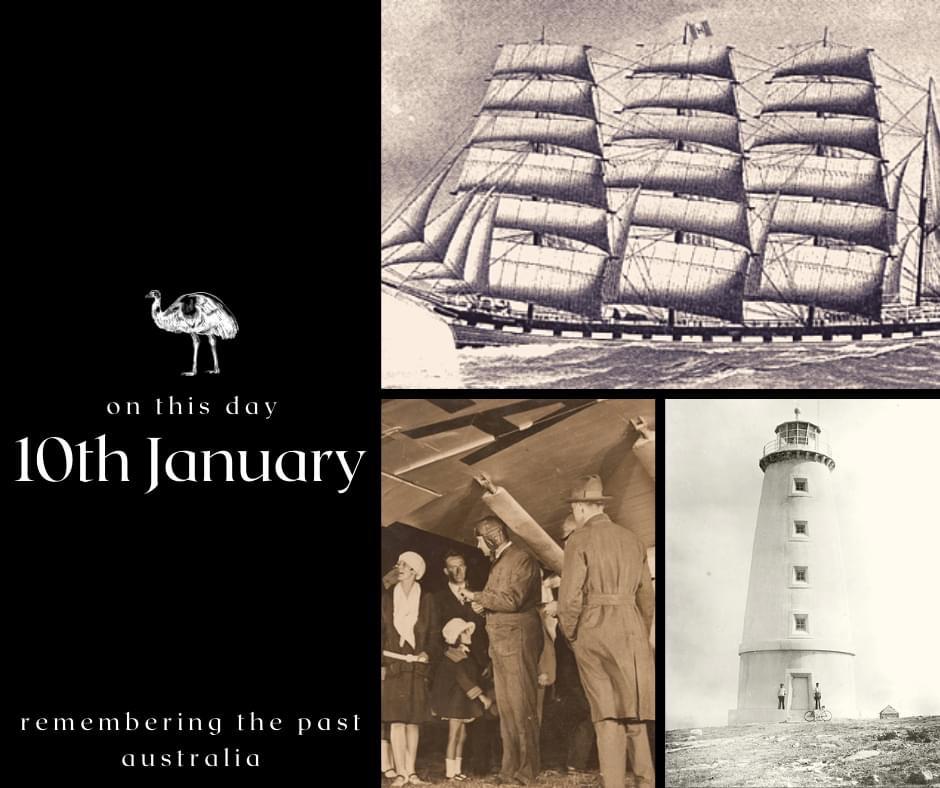 1875 – William Robinson arrived in Western Australia to become Governor of the colony.

1965 – The bodies of two 15-year-old girls, Christine Sharrock and Marianne Schmidt, were found at Wanda Beach in southern Sydney. Despite the offer of an unprecedented £10,000 reward, the murders have never been solved.

1986 – The Gateway Bridge opened in Brisbane.

2005 – Nine people were killed in bushfires in South Australia. 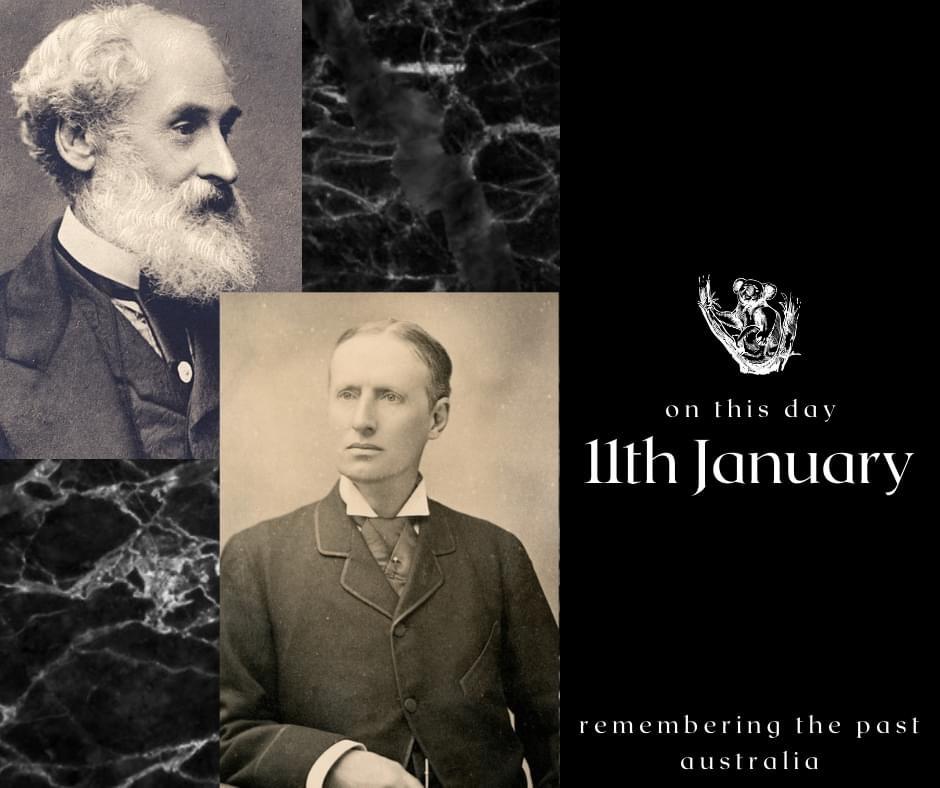 A little ray of sunshine from Australia

1837 – The crew of the Coromandel deserted while anchored in Holdfast Bay, South Australia.

1943 – WWII - Australian and American forces began an attack on Sanananda during the Battle of Buna–Gona.

2005 – Australia's first Twenty20 cricket game was played at the WACA ground between the Western Warriors and the Victorian Bushrangers. It drew a sell-out crowd of 20,700. 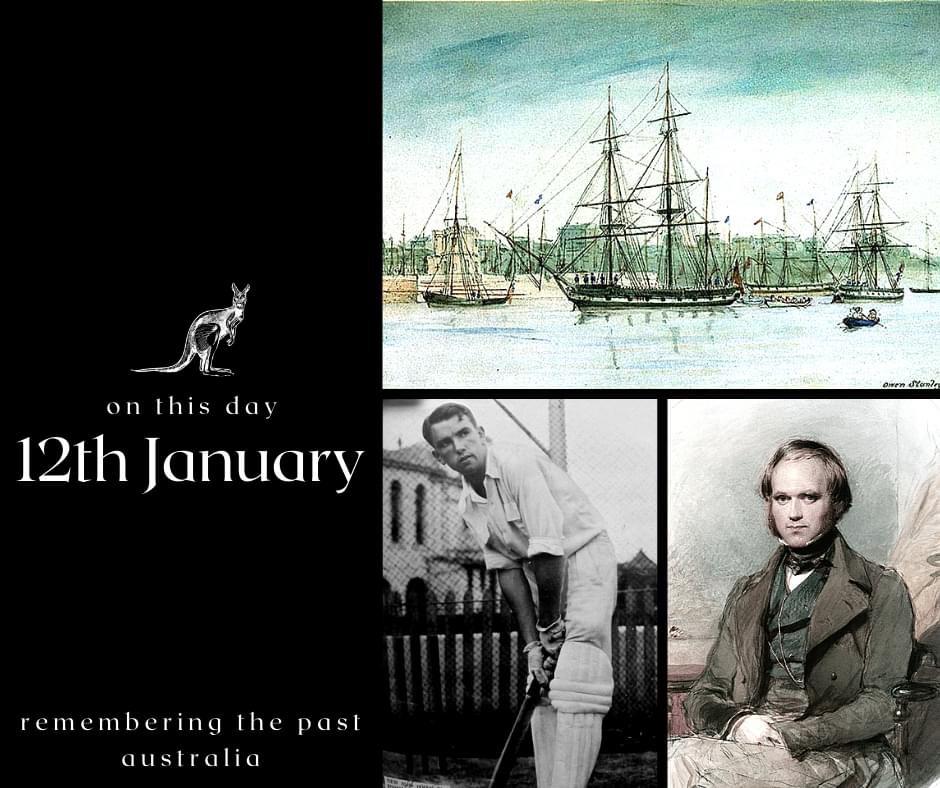 1904 – The flag of South Australia was officially gazetted as the current design.

1970 – US Vice-President Spiro Agnew arrives in Canberra. 14 people were arrested during protests outside Parliament House over Mr. Agnew's visit.

1991 – A Victorian factory which supplied United States Armed Forces is destroyed by fire.

2004 – The Spirit of Tasmania III made its inaugural trip from Sydney to Devonport. It ceased in 2006. 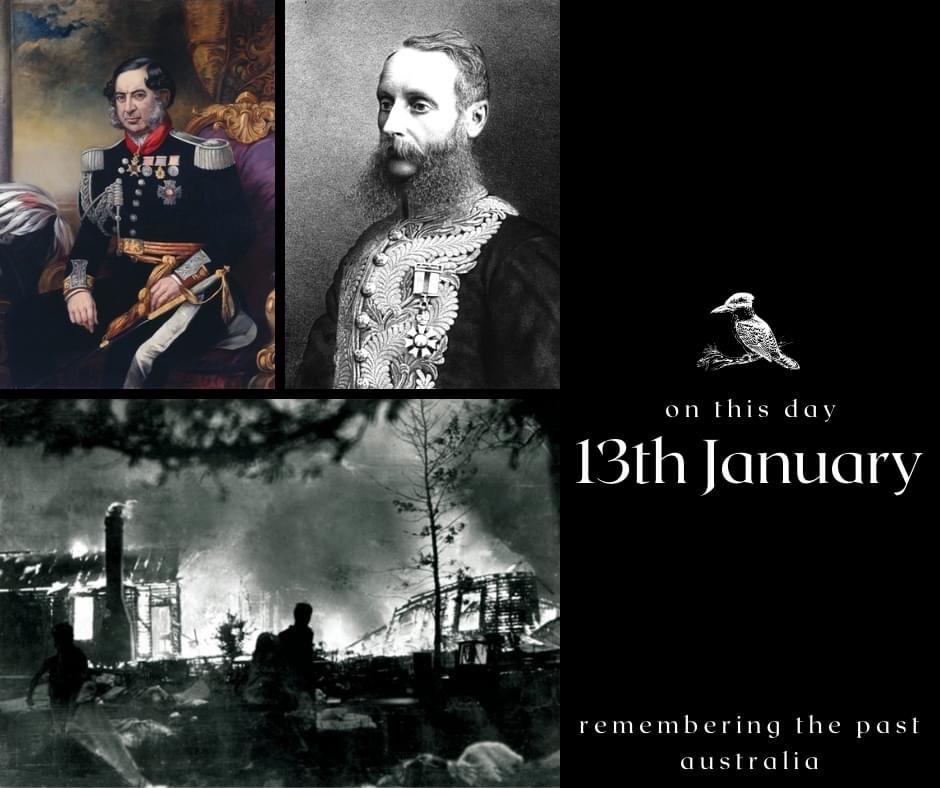 1796 – Australia's first theatre opened in Sydney. Edward Young's The Revenge and the comedy The Hotel were the first works performed.

1965 – Passenger and car ferry 'Empress of Australia' began operating between Sydney and Hobart. 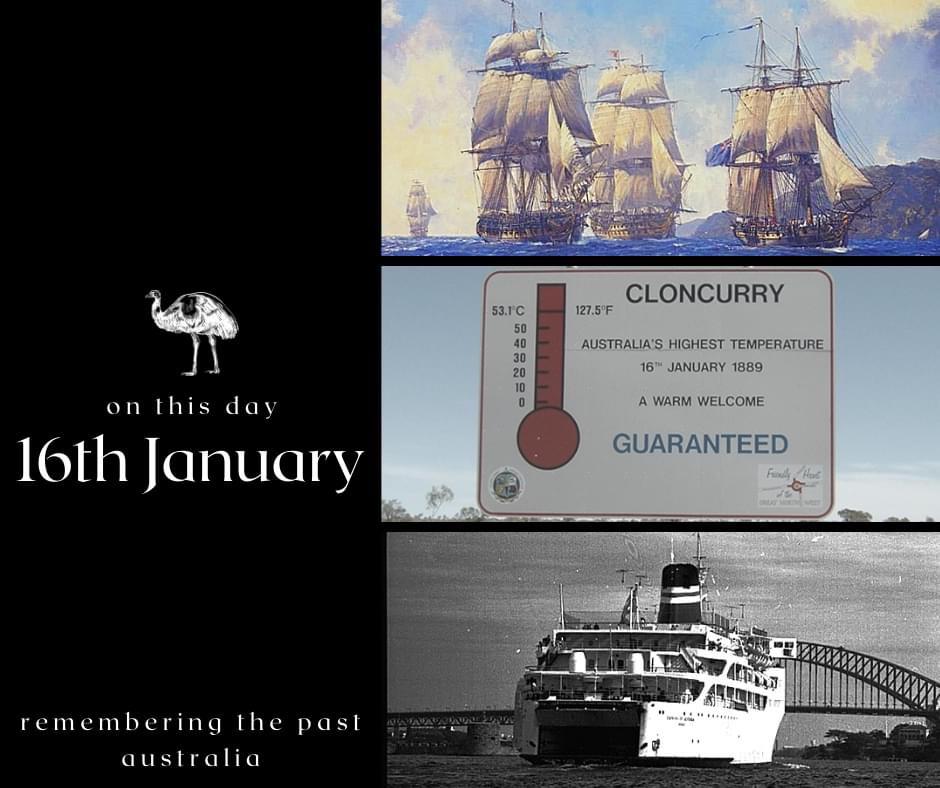 Am I on the right thread? Probably not a ray of sunshine based upon your views, hey ho.
Cancel Captain Cook.
Top

1836 – Charles Darwin crossed the Nepean River on a 'ferry-boat- and ascended the road built by William Cox.

1922 – The first Archibald Prize for portraiture was won by William McInnes.

1947 – William Dargie won the Archibald Prize with his portrait of Marcus Clarke.

1980 – Debbie Wardley became Australia's first female commercial pilot to take to the skies when she co-pilots a Fokker Friendship on Ansett Flight 232 on the so-called "milk run" from Alice Springs to Darwin. The flight marks the end of a 15-month legal battle with Ansett Airlines to overcome gender-based discrimination which had prevented her from earlier taking the controls.

1988 – The TV soap Home and Away was launched by Seven Network.

1991 – The Gulf War began with Prime Minister Bob Hawke giving battle orders to the Navy stationed in the Gulf after a telephone call from President Bush.

1991 – A siege took place in Brisbane after an off-duty policeman was taken hostage. 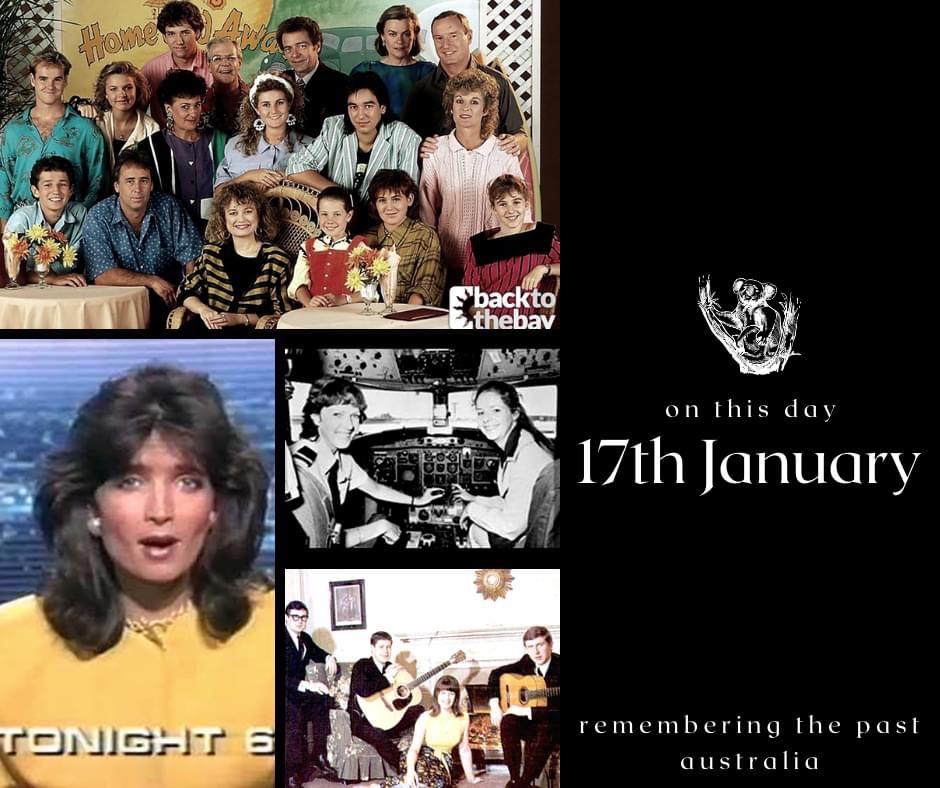 Oh come on, you don't mean that, we've been pals for ages, haven't we? And I'm as English as Alf Garnett.

I had a shower after my run tonight so I'm quite clean.

Interesting piece on the convict ship, though. When did the English stop transporting slaves? I visited the James Cook museum in Whitby back in September - fantastic place.
Cancel Captain Cook.
Top
Post Reply
1365 posts