Information on building a house, buying poperty and land, and all other general contruction topics...
Post Reply
136 posts

GGardenwise the extra rainfall is topping up the groundwater nicely, certain areas prone to pooling have been noted and will be addressed as and when it dries up a tad.
My neighbours are now bemoaning the rain saying too much may damage the rice which appears to be growing well.

You have to be quick these days, a mornings sun dries the grass out enough to trim it, stopping the task of cutting really long grass brought on by the rain .

Well I think the returfing at the far end has blended in well. The forecast rains for next week can only improve the growth 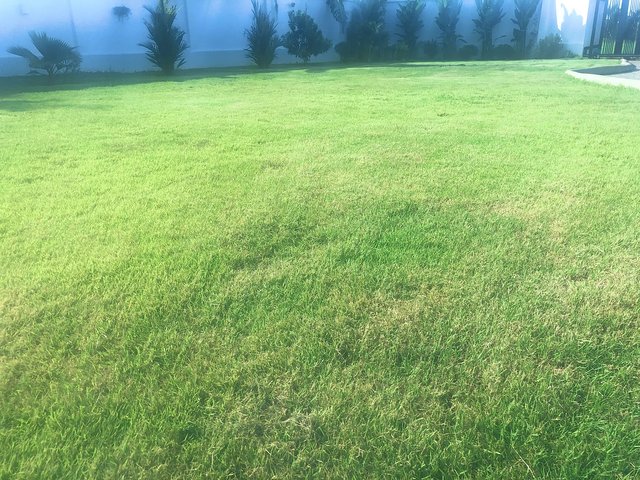 , did you end up contacting KPs gardener for advice or is it all your own work

?? .. as age catches up you need a ride on mower in the years to come.

, did you end up contacting KPs gardener for advice or is it all your own work

?? .. as age catches up you need a ride on mower in the years to come.

All my own (well Mrs N’s) work. The moonscape was always going to go, it’s the shape of the turf sods. Simple really, no need for any imaginary help which was never going to be forthcoming anyway.
There’s probably going to be no need for a ride on for the front but the back is a different story, it’s quite large. I made a bit of a schoolboy error when placing the house piles & it’s further forward on the plot than I intended which means I can’t get a ride on down the side. If I ever get round to buying one it’ll have to be craned over the wall then left there.
I could of course just pay Yai, a ride on mower costs a lot of days wages
Coordinator for Tesco Lotus Boxing Events, fun times, eh
Top

stattointhailand wrote: ↑
September 12, 2021, 4:40 pm
Only thing that grass is missing is a few divots from practice shots with a 7 iron

That would suggest I might have the slightest interest in golf
Coordinator for Tesco Lotus Boxing Events, fun times, eh
Top

stattointhailand wrote: ↑
September 12, 2021, 4:40 pm
Only thing that grass is missing is a few divots from practice shots with a 7 iron

That would suggest I might have the slightest interest in golf

Well I doubt it would be much point smokin' it, and even in Thailand it's not easy to get enough rellies together for a game of footie, so what the 'ell else is the point of grass

Well I doubt it would be much point smokin' it, and even in Thailand it's not easy to get enough rellies together for a game of footie, so what the 'ell else is the point of grass

As it happens, apart from looking nice, it does a perfectly acceptable job of stopping the dry isaan dust from blowing everywhere during dry season.

& before you say it, concrete reflects & absorbs then expels heat making close proximity hotter which isn’t particularly pleasant around a house

C'mon, just be honest and admit you are just trying to convince Emma Whatsername to come here for some "warm weather tennis training" and you haven't got round to marking out the court yet
Top

In your faces fan club, you know who you are
Coordinator for Tesco Lotus Boxing Events, fun times, eh
Top

stattointhailand wrote: ↑
September 12, 2021, 9:51 pm
If you would like to purchase a patreon subscription I can make cringingly nice comments on a one to one basis

You can make cringingly nice comments here too if you want. I won’t be offended by your public display of affection

Finally my little lemon tree has given birth to a nice piece of fruit.
Has taken time with a couple of attempts.
Now I can maybe appreciate my Japanese gin with also a touch of tonic.

Nice work Barney. Have you tried any of the old wives tales to grow a good lemon tree mate?
Some rusty metal buried under it or pissing on the ground around it?
Top

grievous wrote:Nice work Barney. Have you tried any of the old wives tales to grow a good lemon tree mate?
Some rusty metal buried under it or pissing on the ground around it?

Hi grievous
I’m certain I have tried one of those
Methods.
Through most of the garden actually.

That’s a shame, looks like Mrs N’s seeds she’s ordered will just be a waste of money. Lesson here kids is Lazada will sell anything you want without any consideration whether it will work.

The climate of the Central Plains is far from optimal for growing this heavenly scented medicinal plant, and it is only in the mountains of the North that conditions are cool and dry enough

Pavan Khimesra has been unsuccessfully trying to grow lavender in his Bangkok home. ''The seeds just do not seem to germinate,'' he wrote. ''I understand that the plant grows in the Mediterranean climate so it might be possible to grow it in Bangkok. I am trying to grow the munstead dwarf, hidcote dwarf and true lavender varieties, which I think are all types of Lavandula angustifolia. Lavender grows in hardiness zones 4-10 as classified by the US Department of Agriculture [Bangkok is 10], and in the American Horticultural Society's plant heat zones 2-11 [Bangkok is 12].

''Do you think I can grow lavender in Bangkok?'', he asked. ''It is possible that I am unable to grow it due to my lack of knowledge or equipment. Is there someone who could grow the plant until it is big enough for me to maintain it?''

Another reader, Peter Dwje, wanted to know where he could buy flowers which have been dried without the use of chemicals and dyes. ''I'm particularly interested in aromatic flowers, such as lavender, in little plastic packages,'' he wrote.
Lavender at the Royal Project's Doi Ang Khang research station are now in bloom and ready to be harvested. As in the past two years, the flowers will be sold at Royal Project outlets as dried flowers in sachets, potpourri and perfume oil spray. There are also plans to make lavender soap.
The products, however, come in limited quantities, for although the Royal Project has several research stations in the highlands of Chiang Mai, it is only on Doi Ang Khang that lavender is grown. This is because, with elevations ranging from 1,200m to 1,400m above sea level, it is the only place cool enough for the growing of this flower, which many people love for its beautiful mauve to violet colour tinged with blue and long-lasting, heavenly scent.
Mr Khimesra has chosen to plant a species that has been unsuccessfully grown even in the coldest parts of Doi Ang Khang. Lavandula angustifolia (also known as Lavandula officinalis and Lavandula vulgaris), or English lavender, is extensively cultivated in Europe and sometimes found growing wild in its native Mediterranean region. But apart from loamy, well drained alkaline soil, full sun and a temperature of 13C to 18C, an important factor in growing lavender and that other Mediterranean native, pomegranate, is dry air. Thailand's air and soil humidity are too much for the delicate English lavender.
After many years of trying, researchers of the Royal Project have been more successful with the hardier Lavendula stoechas, commonly known as Spanish or French lavender, and Lavendula multifida, or fernleaf lavender. Both are herbaceous, bushy plants with grey-green leaves and flowers borne on long stems above the foliage. But while the former has small tubular leaves, the latter has lacy leaves, like ferns. Lavendula stoechas is known for its intense fragrance and pinkish violet flower spike topped by violet bracts. The bracts are lacking in Lavendula multifida, which makes up for it by sometimes having three blooms per stem, and for producing seeds that are easily grown. The latter, however, does not have the familiar lavender scent but rather smells more like oregano.
Like all flowering plants, lavender seeds are sown and the seedlings transplanted into well cultivated plots. Plants are spaced at least one foot apart for ventilation. But even on Doi Ang Khang, they can be planted only in August and September, when the temperature begins to drop. Flowering time is January to April. In addition to seeds, plants with flowers of the same size are selected and propagated by cuttings for the next planting season. The plants are made bushy by pinching new growths, and rejuvenated by pruning out old branches. Fertiliser used is NPK 46-0-0 alternating with NPK 15-15-15.
The Royal Project was set up by His Majesty an individual more than 50 years ago to carry out research on agricultural products which could be introduced as cash crops to hill tribes, who, at the time, knew only how to plant opium poppies. The hill tribes now enjoy a better life planting vegetables, cut flowers and temperate fruits, but researchers continue to experiment on new crops. The project's director, HSH Prince Bhisadej Rajani, loves English lavender and for years he had brought it back from his travels abroad, but it has only been since 2010 that the Royal Project has been successfully growing it on a commercial scale, thanks to staff member Thanavudh Nakham, who did not give up despite earlier failures in growing it.
Lavender contains essential oil, which is distilled for use in perfumery and cosmetics. The flower's colour becomes more intense when it is dried, and it retains its perfume for a long time. Fresh or dried, the flower has been used as a remedy for a range of ailments, from insomnia and anxiety to depression and fatigue. A study carried out by researchers at the University of Maryland Medical Centre confirmed that lavender produces calming and sedative effects, but I don't need scientists to tell me this. I have a box of lavender potpourri near my bed, and all I have to do is open the box if I want to soothe my nerves or to sleep soundly.