jackspratt wrote: ↑
May 16, 2020, 2:41 pm
Besides being a world class, gold medal liar, Trump has progressively corrupted the political processes and norms in the US - which weren't great to start with.

Yet despite this, there are those who are happy to offer him support and congratulations because ....... he is not Hillary.

As I said here a few days ago:


Critical analysis is a rare commodity on a lot of social media, mike - unfortunately UM is no different in that regard.

The Bloated Orange Bulshiiter's latest egregious assault on US "democracy":


The Trump administration has fired the state department’s inspector general who is reported to have been investigating the secretary of state, Mike Pompeo, for a potential abuse of office.

The inspector general, Steve Linick, was given notice of his dismissal late on Friday night and is to be replaced by Stephen Akard, a close ally of the vice-president, Mike Pence, from his home state of Indiana.......

....... Linick is the latest in a string of officials in watchdog roles fired by the president in recent months, turning on its head the tradition that such jobs are filled with non-partisan figures. Trump has demanded personal loyalty from officials working in the administration, especially those in an oversight role.

With the steady manipulation of the US judiciary including the AG's office and the Supreme Court, Donny John has truly embraced swamp draining... Venezuelan style. Remove the traditionally non-partisan entities and replace them with sycophants. Straight out if the Hugo Chavez play book.

I think Trump needs to take Covid 19 more seriously from a personal health perspective. I suspect he's still taking risks. He's not the kind of guy that's going to follow his doctor's advice. If he doesn't it might be a Pence - Biden basement election.

When it comes to public health, the US, largely thanks to the Trump administration, is a failed nation state.
Top

Isnt that how Trump sees himself

blond syrup, overdone tan, on or in "the tube"(TV) dressing up and preechin' ta anybodys daughters who show the slightest sign of lusting for money
Top

you simple-minded brits forget , he's been in the
public eye the last 30 years. No , i don't ever previously recall him aligning himself with evangelicals . that all came later , as hillary terrified them . and they were scared with good reason. gawd you brits obsess with tabloid fodder
Top 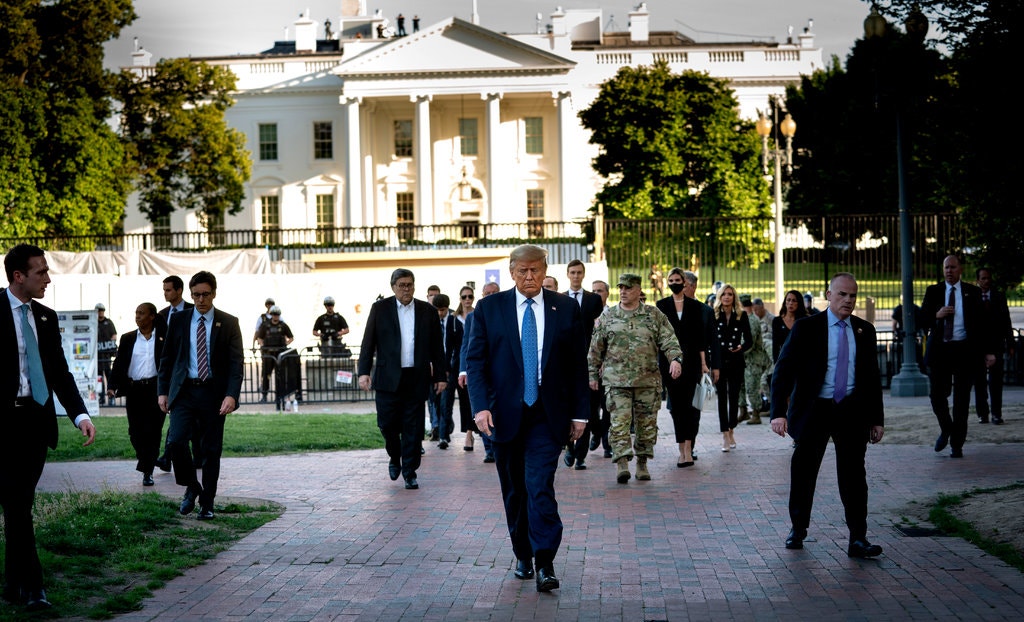 General Mark A Milley out campaigning with President Trump. Good social distancing from the law and disorder candidate.
Top

Oh I reckon the football fans on here remember him back when he was white. Oh the football played with the feet that is, not wearing a crash helmet.

"Don't believe everything you read on the Internet." - Gandhi.
Top

I'd guess that's a photo from his pre-Stormy days and pre-orange face days.
Top

I have never liked Trump. I have called him a buffoon on a number of occasions. As compared to Hillary, he was a knight in shining amour and that is why he was elected. Truthfully, I didn't expect much from him. BUT. credit where credit is due. He is much better than his talking head socialist predecessor. I can't help but approve of the job he has and is doing. You don't have to like him to admit that he is doing the job he was elected to do. His haters simply refuse to open their eyes and admit that they are wrong. The democrats simply cannot seem to come up with a decent candidate. Uncle Joe is a disgrace as well as being senile. He and his family have greatly profited financially because of his role as vice president. We have to get ready for another 4 years of Trump, there is no one else. Politics stinks.
Top

Glatt,
I'm with you.
What I like about him, is that he made a ton of promises before he was elected, and he is doing he best to deliver them.

Most politicians, promise the world, but once elected, find some pathetic reason not to deliver.
And, people keep voting for them, that's what surprises me.

I've also, never had an interest in USA politics, but since Don was elected, it has been the greatest show on earth.

He's doing his best, and you can't ask any more of anyone than that.
Love him, or hate him, that's the way it is.
mick
Top

Ok, so pulling theUSA out of the Paris climate accord so as he can keep his fossil fuel investors happy is a good thing? Dismantling everything Obama did to improve USA standards is a good thing?(the list goes on.)
The promises he made were to his base and to and for all Americans. His strategy is to divide and conquer and get re-elected. A person who has never known what it’s like to struggle, can never be a leader for all of the country.

To and for his base and NOT all Americans

But don't you need more than that? What about the promises, themselves? How about if he promised to kill old people and abolish nursing homes, because it would be so much easier and less expensive. Would you still give him credit for doing what he promised?
Top

exactly , riddled with flaws and everything else , he's at least getting the job done . when his contemporaries are unwilling or unable to do it.
Top

You can only vote for, what you believe, will be the most beneficial package.

That's the system.
like it or not.
Mick
Top

And by the way, i dont hear you talking about the NY Governer who sent Covid infected people to all his old folks homes and killed all them?

See, neither side perfect?
Top Attorney General William P. Barr, without a tie, looking very shifty. Perhaps he can still smell the tear gas. I wonder if he's one day going to end up in jail like [former American Attorney General] John Mitchell. He currently seems to be one of the more dodgy Trump enablers.
Top

What a ridiculous analogy from Udonmap. One can only assume you are insinuating that those who voted for Trump in 2016 would still have voted for him if your example was part of his raft of election promises in 2016. I thought you were above this type of crap.
Top

i don't think that's actually an analogy. he appears
to be asking about the ethics & morality of the
individual pledges the candidates make.

i find this whole thread farcical. it's like me lecturing on aussie, scot or brit politics. i don't have background, the context or the depth.

my suggestion, actual yanks have full size type
non-yanks ( the baying mob) have their type size
reduced to 3/4 because their commentary silly
Top
Post Reply
8679 posts